On 13 July, ten people gathered at Johannesburg Bible College in Soweto to dialogue around the topic of “Killing in schools”. Other themes included violence in home and society, rights and freedom vs. responsibility, and government’s failure – mainly in the education system, the unintended societal results of changes and laws, and the unintended results of institutions taking over responsibilities that were relational before. 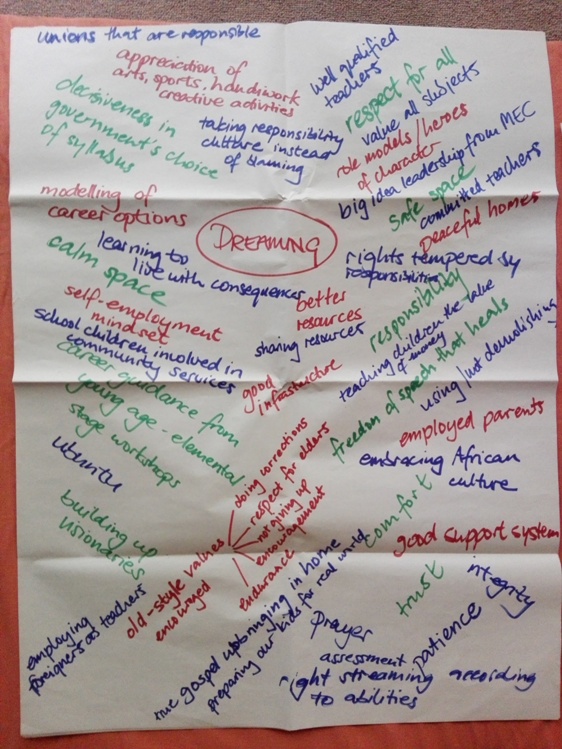 As the dialogue progressed, the complexity of the system emerged, including the very real life pressures of poverty, an abusive family, risk of rape in the community, anxiety around the safety of our children, the influence of alcohol abuse on the family … and the helplessness young people, teachers and parents feel. There was a recurring feeling of being trapped within the system e.g. wanting to be involved as a parent and stand up when one does not agree with something happening at school, but held back by the fear of the children being victimised as a result. At one stage there was a lot of finger-pointing of voices at each other, and all voices pointing at the government.

There was an observation that South Africa has brilliant conversations going on, but they have become monotonous. The brilliant ideas are not being applied and we are going nowhere. It’s become such a cliché to blame the government but they are actually to blame. They value quantity above quality. In the medical system, school system and others, it’s about numbers and the loudest voice. The goal “to make the country ungovernable” during Apartheid may still be reverberating today and having an influence on our society now. Violence has become a language used by those who feel unheard.

However, the hope was expressed that when parents, teachers and students work together, they can effect change. We recognised, that in some cases, we have failed because we should be an example and not blaming others. Although it is not going to be an easy road, in our personal spaces we took responsibility to affect practical change, from taking family responsibility and empowering leadership from home, empowering colleagues at work, getting the church involved, to aiding our community in acquiring practical skills that can improve everyones’ material condition.

On the subject of the Grantleigh artwork, let's think a little about the storm of activity in response to the…

On 18 May in Auckland Park, the topic chosen was “Family”. The dominant theme was the continuing influence of inequality…