Why is the current political climate so quiet ahead of the 2019 elections?

In Hatfield  on 6 April 2019, the people in the room voted for the dialogue topic “Why is the current political climate so silent ahead of the 2019 elections?”

The  challenges or concerns of the group included struggling against paralysis, feeling helpless or guilty, and a recurring questioning of ourselves “Are we making a difference? Am I being set up for failure?” 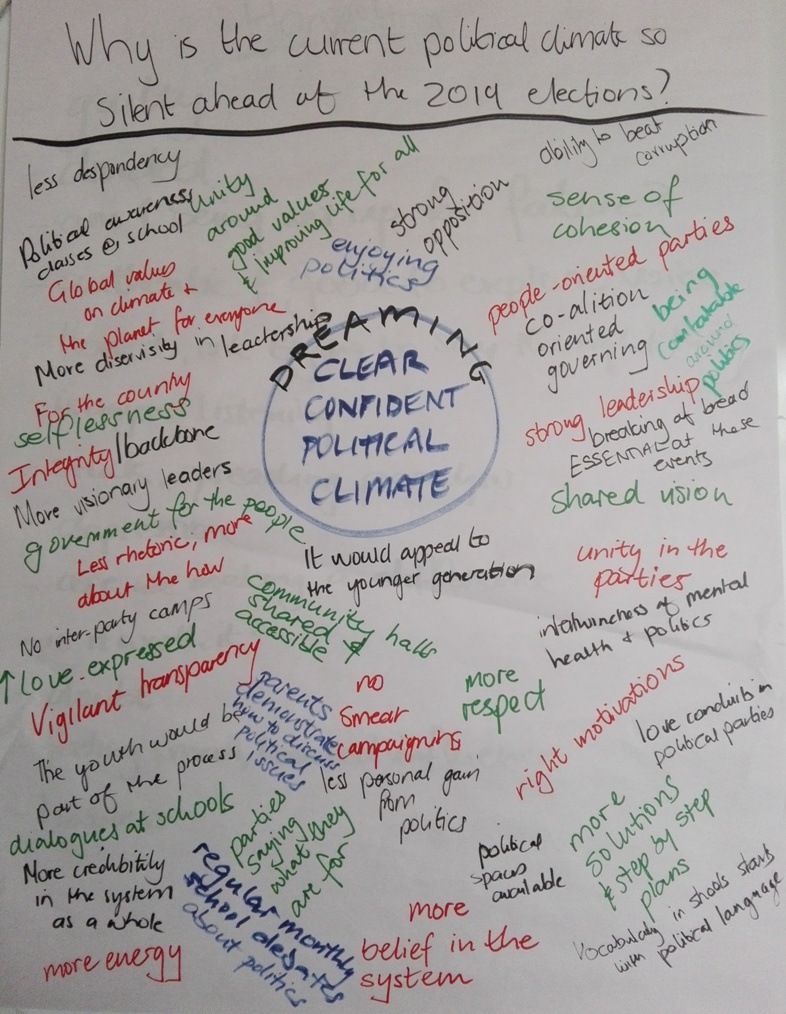 As many of you know, participants decide to represent a particular voice during the dialogue. Some special moments from the dialogue included:

At this point, almost a month before elections, there is a sense of despondency, depression and hopelessness about elections. People expressed a loss of agency and widespread paralysis. Cynicism with most political parties and their in-fighting and apparent apathy was apparent. There was an awareness that this apathy is everywhere, along with a realisation that everyone is fighting for their own survival – each individual in society as well as each politician. Most people seem unsure who they will vote for, although there does seem to be a conviction that voting is the right thing to do and necessary – the only hope there is for the needed systemic change. If we don’t vote, we have lost the last thread of agency and cannot voice our complaints afterwards. There seems to still be a wanting to hold onto hope despite it all. Some people managed to see a purpose and growth in this current time of desert or perceived darkness and still have the energy to organise.

Join the troops for Cover Wars!

Annarie Paterson designed a stunning cover for my poetry book Dwelling in Dissonance. (The poems in this book are largely…

In Randburg on 16 March, the topic chosen was “Missing Men”. It feels like this was a “holy ground” dialogue,…